Be Amaze: Meet the superhuman “CHILI KING” from China.

A Chinese man from small village has become an unlikely celebrity in China after claiming he eats 2.5 kilograms of chili peppers every single day. Eventually, he earned the nickname “Chilli king” from those persons who had seen him. 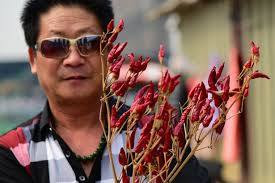 Li Yongzhi, a guy who lives in the village of Shawoli in Henan province, became a local hero for his shocking addiction to red-hot peppers, says he loves them so much to the point that he grows eight different varieties in his own back yard. He also said he has eaten chilies ever since he was a child and got addicted to the spicy peppers about ten years ago and has now grown so used to the heat that he barely feels it every day. 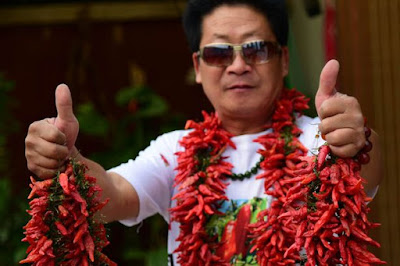 Li who grows eight different kinds of chilies in his yard explained he could live without eating meat or eggs but he absolutely needs to have his daily dose of peppers or he’ll be very unhappy in his life. He said that without chili peppers, his meal usually have no taste. He also added that he uses chilies as mouthwash in the morning. What amaze more is he eats his daily quota like snacks throughout the day. Each night while relaxing he will enjoy a light snack of chili peppers eating them like they are melon seeds, one by one.

His story started ten years ago wherein a hit and run accident left Mr Li’s elder son with two broken legs. His family spent hundreds of thousands of Yuan on medical expenses. At one point, he barely had money left for food. He went into a restaurant but was told they had sold out all the food. Mr. Li decided to sit down and eat two bowls of chili powder with a glass of tap water. Since then he discovered that he has a much higher tolerance of spicy food than others. Eating 2.5 kilos of chili peppers a day might not sound great for your body, but Mr. Li says that he has experienced no problems. He said that he just like to eat the chilis and he don’t even needed a supernatural powers to do that. The hospital checked and they said that I am no different from anyone else. So what can you say about Li’s ability? Is it amazing. Share this article with your loved ones and friends now. Source: http://www.trendspot.co/2015/10/meet-superhuman-chili-king.html

Be Amaze: Meet This Man Who Single-handedly Created a Village of 60 Millionaires

Look: Gutter Oil to cook food because it comes out cheaper used in China