Weird: Meet the woman who eats 20 kitchen sponges a day soaked in a Fairy liquid soap!

What do you do with a sponge and a liquid soap? Of course, you will use it for washing plates, right? But what this woman’s cravings is so unbelievable! Introducing Emma Thompson, 23-year-old, suffering an OCD disorder called PICA. Pica syndrome is an eating disorder, wherein some people crave for things without nutritional value like sand, chalk, sponges, and many other household objects. On Emma’s situation, she loves nothing better than a sponge soaked in apple flavored washing liquid before putting it on her mouth. She says it was his ‘guilty pleasure’. 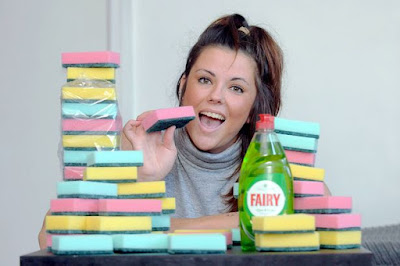 For more than two decades Emma has enjoyed the texture of the sponge. She started chewing bath sponges when she was just three years old before discovering she liked the taste of kitchen ones. She admits that eating up to 20 kitchen sponges a day is becoming something of an issue. Emma has been taking bites from sponges for almost 20 years! But it was only about two years ago when she started to literally eat the whole sponge. She said she soaks the sponges overnight in flavored apple Fairy liquid before enjoying one first thing in the morning. 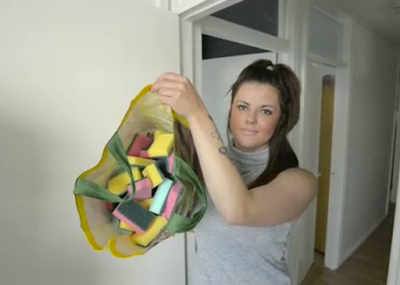 Due to her cravings, she has previously had tonsillitis because of her eating habits. She revealed that she spends almost £6 a week on sponges from Wilkinsons and Poundland. And she eats the sponges daily, finishing 4 a day and even 20 when she’s stressed. Emma said she has not been to see a doctor about her condition and said she would only consider it if it starts controlling her life. “I leave it to soak on the bench, I was in a rush this morning so I only ate half of one. When I used to see a new sponge in the shop I would try them but I was always disappointed so now I stick to what I like. My boyfriend Alex thought I was weird at first but now he buys me them. I don’t like to think about never having a sponge in my flat,” she said. Pica is an uncommon disorder, but it happens more frequently in young women and children. It is in the same category as obsessive compulsive disorders, anorexia and depression, and is considered to be a mental health issue. The effects on an individual depends on the items they are eating. Some people eat nails and metal. Then there is the chemical aspect. With sponges and washing up liquid, it is the chemical aspect that is worrying. It can cause diarrhea, vomiting, abdominal pain and nausea, but depends what the sponges are made from. People who suffers with PICA should try and not have the inedible item in the house, and avoid shops which sell it. Cognitive behavioral therapy can help. Does this one bother you? Share it to online for others to know too. Source: http://www.trendspot.co/2015/10/Meet-the-woman-who-eats-20-kitchen-sponges-a-day-soaked-in-a-Fairy-liquid-soap-WEIRD.html

Be Amaze: Meet the superhuman “CHILI KING” from China.

‘OLDEST’ Woman in the Philippines Celebrated Her 18th Birthday

Viral: Elderly Woman Gets Injured After Some People Gave Her Alcohol Instead of Water
loading...