Shocking: Newborn baby still with umbilical cord was thrown outside from a 5th floor window by his parent!

There are some women who are having a hard time to conceive a baby. It was always there dream to become a mom. But why are there women who choose to kill their baby rather than taking care of them and raise them. What happened to this baby in China was shocking! 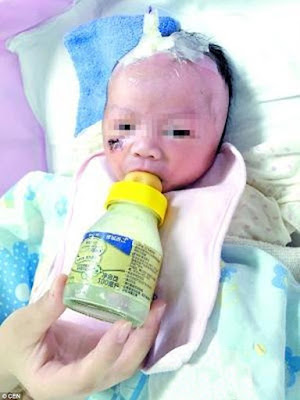 A newborn baby still with umbilical cord was thrown from the fifth floor window of a building in China by his teen mother right after his birth. According to report, the teen mother was only 15-year-old named as Zhen has now been detained by the police. Zhen been reported that gave birth on her own in the public toilet of their rented place on October 14. The baby survived the 33 foot tall building with just a broken arm, when he was found by the landlord of the building. 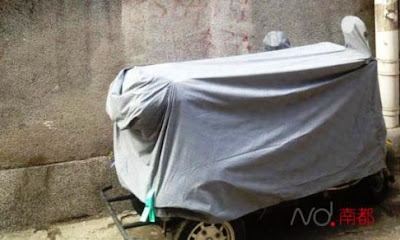 The landlord surname Zeng was parking her bike close where the baby landed on the canvas shade of a tricycle when she heard the baby crying. According to Zeng the baby boy was still covered with blood when she first saw the baby. “My first reaction was to find a doctor, but then I feared he was about to die soon, so I just picked him up, covered him with a piece of cloth and ran to the hospital,” Zeng said. “I was so scared that my legs were shaking when I arrived in the hospital,” she said. “But it’s a life and I just couldn’t look the other way.” Zeng brought the baby at the Changan Hospital were they said that the baby was a miracle. “This baby boy fell from more than 10 meters up (33 feet), his present condition could be said to be a miracle,” said the doctor who treated the baby. The newborn baby boy suffered fractures to the humerus bone on his left arm. He has also experienced some swelling to his head and received scratches to his face. The teen mother was living with her 19-year-old boyfriend, who remains unidentified. According to Zhen, she was trying to get rid of the baby during her pregnancy but was told that she was still young to have an abortion. She felt neglected by her boyfriend throughout her pregnancy. After giving birth alone, A Zhen’s despair increased, which was what prompted her to get rid of the baby through the window. Because of Zhen’s age, the local government has assigned a social worker to the teen mother. The police detained Zhen and charged her with attempted murder. The ate still currently looking for the boyfriend, who had disappeared since the incident. However, the baby boy is healthy and stable. Visit our website regularly for more interesting and trending news and stories online. Kindly share this with your friends and if you have any comment, please write them below. Source: http://www.trendspot.co/2015/11/SHOCKING-Newborn-baby-still-with-umbilical-cord-was-thrown-outside-from-a-5th-floor-window.html

VIDEO: Charming and Adorable Way of a Girl Calming Down her New Born Baby Sister

Watch Video: Pinoy Henyo Baby that Will Amazed You