Look: The first ever footage of an uncontacted tribe goes viral!

Circulating now online is the first ever footage of the uncontacted Amazon Tribe. This will surely consume some of your time but it surely is worth it! Take a look at them. Because of the latest technologies that geniuses have discovered, most of us are undeniably living a happy and easy life. But have it crossed your mind that there are still people who doesn’t know about technologies? 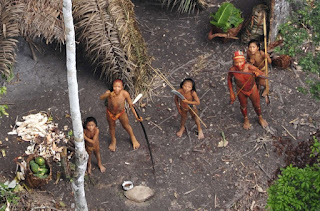 In this era of medical and technological advancements, while most of us worry about the latest fashion and gadgets, would you believe that there are still groups of people who are living in isolated places? An extraordinary aerial footage of one of the world’s uncontacted tribe has been release, for the first time ever. There are only 100 uncontacted tribes remaining in the world, one of these is the Indian Tribe living in the dense Amazon forest. According to the Survival Intentional, these uncontacted tribe have probably lived on their lands for a thousand years. The Amazon Tribe is considered to be light years away from the civilization. They are really worried that when the people from the civilization see them, they may not face them to shoot camera but rather, shoot guns! The good thing about finding out about them is the fact that there are already campaigns launched to protect and save the tribe form invaders! Survival’s new film, hosted by Gillian Anderson, has also launched campaigns to help protect the earth’s most vulnerable people. The BBC film crew were allowed by Jose Carlos Morales, who works for the department by monitoring the tribe’s land in search for sign of invaders, to film and capture amazing aerial footage of the tribe. This is their way to show the government and the rest of the world that the tribe exists and they must do an act to preserve their land. So what can you say? Did you enjoy reading this article? Visit our website regularly for more interesting and trending news and stories online. Kindly share this with your friends and if you have any comment, please write them below. Source: http://www.trendspot.co/2015/11/the-first-ever-footage-of-an-uncontacted-tribe-goes-viral.html

Creepy: Chair rotating and moving on its own seen on CCTV footage as Halloween approaching!