Inspiring: A couple who met online discovered they were childhood sweethearts 30 years ago!

A couple who recently met randomly online as complete strangers, eventually fell in love with each other. They were unaware that they were actually preschool sweethearts before! Back in 2012, Justin Pounders was still devastated by the loss of his fiance, Adrianne Robert, who was murdered. The incident brought him to Orlando, Florida, where his mother promised to find him another woman to love. 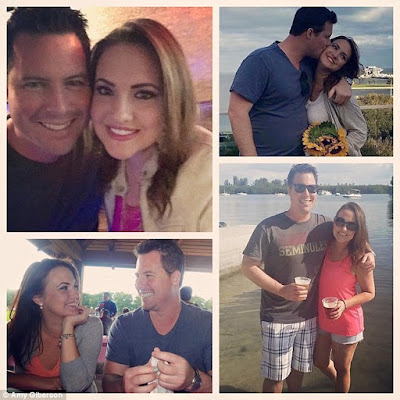 In 2014, he started visiting a dating site on Match.com and was immediately smitten with the photo of a woman named Amy Giberson. Justin said that when he saw her photo, for whatever reason, he was instantly drawn to her. He said that the woman had this great energy. He couldn’t explain it but he knew that he had to get to know her. 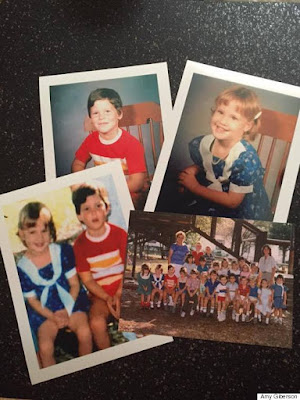 Justin and Amy meet and dated for a year and became a couple. It was only recently that that they realized they were actually childhood sweethearts more than three decades ago! Amy Giberson said she knew there was something special with the man she met when they first hugged each other. But she had no idea what it was. And during a casual conversation inside a car, they discovered that they went to the same school in preschool in their hometown St. Petersburg in Florida.They were not just schoolmates at Sunshine Preschool but actually had an innocent romance, having crush for each other. A month passed, they found out the second clue. Amy said that one night Justin pointed a scar on his eyebrow which is because of a fall from the monkey bars at Sunshine Preschool. In that moment, she realized that she might be the ‘Amy’ her boyfriend had a crush on. They have called their mothers who might have kept photos from their preschool days. There, they uncovered pictures showing the two of them together. They believe that Justin’s late fiance, Adrianne, may have been their guardian angel who have made thinks possible for them to finally meet and prove that true love do exists. If you are planning to try you fate and look for the ‘perfect someone’ in online dating sites, watch these tips first! Like what you read. Share it with your friends and love ones now. Please share your thoughts too. Source: http://www.trendspot.co/2015/11/a-couple-who-met-online-discovered-they-were-childhood-sweethearts-30-years-ago.html

Couple Fell In Love with Each Other Through Mobile App, Clash of Clans!

Couple Literally Divides Their House in a Half After Divorce!
loading...