Halloween is not over yet for this mother who sees something while recording her child as he played on the tiled floor. The terrified mother suddenly spotted a mysterious creature passed by during the process. The mother claimed to have caught on tape a weird looking goblin like creature as she was recording her child while playing in the kitchen. 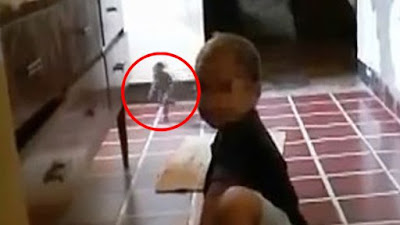 In the video, a two-year-old child, Benjamin, is playing on the tiled floor and looks at his mother’s camera as his mother talks to him. But moments after the video started, a tiny ‘elf-like’ like creature suddenly runs from the doorway behind Benjamin and disappears under the cupboard. The camera becomes distorted as the mother screams loudly. She run and tried to look underneath the cupboard, where the weird creature she thought would appear, but it was not there. According to the family, who uploaded the video on YouTube, the mysterious creature left behind a foul smell and a yellowish liquid on the floor. The family who lived in Mexico, have notice that their child is talking to himself and his “imaginary friend” more and more often after the incident. They said that the ‘elf’ has a continuous presence in their house. But some netizens weren’t easily convinced. One said that it was so fake and that if he would see something like that near his baby, he would drop the phone and pick up the baby so quick instead the mother in the video keeps filming. Another netized said that the shadow don’t add up or work together. Therefore he concluded that it was fake. How about you, what can you say upon watching the clip? Share your thoughts with us now and don’t forget to share this with your friends online. Source: http://www.trendspot.co/2015/11/mother-films-elf-like-creature-running-across-her-kitchen-floor.html

Shocking: Newborn baby still with umbilical cord was thrown outside from a 5th floor window by his parent!

Weird: Meet the woman who eats 20 kitchen sponges a day soaked in a Fairy liquid soap!