Every one of us may have our new born siblings, it maybe a brother or a sister. And looking at them makes us smile or say that they we’re so cute. We always wanted to capture those precious moments of our little ones. From their first smile, first laugh and other firsts they do. But something happened to this baby after someone took a close up picture of him and it was shocking. This story should be a lesson to everyone who loves taking pictures of babies through their camera. A three-month-old baby from China left blind in one eye after a family friend took a picture of him and forgot to turn off the flash while taking a close up photo. The parent’s noticed that there was something wrong with their baby’s eye vision as soon as after the picture was taken. The camera was just about 10 inches away and the baby couldn’t react in time and the bright light from the flash entered the eye and damaged the macula, the area of the eye where light is focused. The doctors said that the baby has suffered irreparable damage from the flash of the camera. It suffered reduced vision in his left eye and blindness in his right eye. The damage is said to be permanent and cannot be fixed with a surgery. Doctors warn that very bright lights in general can lead to vision damage in kids younger than four. 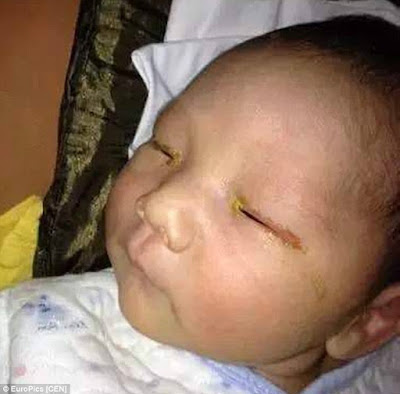 Dr. Christopher Asandra said that everyone knows that babies have sensitive skin, but they’re sensitive in many other ways as well. It’s a good idea to protect them from exposure to anything extreme, including very loud noises and very bright lights. Damage to the macula can lead to the loss of central vision, which allows people to see straight ahead. The strong flash has damaged cells on the macula, which is the part of the eye where incoming light rays are focused. According also to the doctors, macula is not fully developed until children are four; meaning youngsters are very sensitive to strong light. This was definitely a scary story though, but Dr. Alex Levin, chief of pediatric ophthalmology and ocular genetics at Wills Eye Hospital in Philadelphia said that this incident was inconceivable. If the story were true, there would be lots of blinds babies out there. “We operate on young babies and shine a very bright light directly on the most sensitive parts of their eyes for up to 30 minutes at a time, and even that doesn’t cause blindness,” says Dr. Levin. Dr. Levin’s conclusion was that the baby was already blind before the family friend took the photo. According to experts, babies will shut their eyes when exposed to light on reflex, just milliseconds of strong light can cause permanent damage. It is not clear whether the family friend will face any legal action following the incident. Whether this story is true or not, the next time you visit a new born or you have recently become a parent, make sure to turn off the flash of your camera before taking a photo of the baby up close. Source: http://www.trendspot.co/2015/10/warning-three-month-old-baby-becomes-blind-after-a-family-friend-takes-his-picture.html

Watch Video: Pinoy Henyo Baby that Will Amazed You

VIDEO: Charming and Adorable Way of a Girl Calming Down her New Born Baby Sister
loading...