Amazing: She has no face but she’s happy! This woman’s story will surely bring you into tears.

Being happy with yourself, with what God has given you is the best thing! Check this woman’s story that will surely bring you into tears. Meet Khadija Khatoon a 21-year-old girl from Kolkata, West Bengal, Eastern India who spent her life without a face. She doesn’t even know if she has eyes or a nose and her mouth is a small slit on the left side of her face. 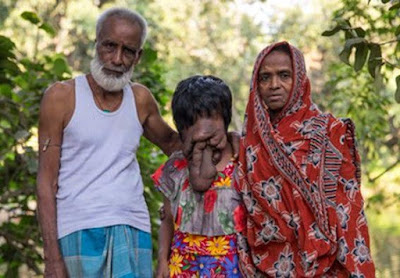 Khadija was believed to have neurofibromatosis, the general name for a number of genetic conditions that cause swellings or lumps, which has severely distorted her features. Despite her problems Khadija says she is happy with her life. When Khadija was born, doctors were shocked by her condition. It was their first time to experience such condition. Thought it was never been confirmed, they believed it was neurofibromatosis. Neurofibromatosis is a rare deformity that causes tumors to grow along nerves. Tumors are swellings formed by a growth of cells. Neurofibromatosis type 1 is the most common form of the rare condition, affecting around one in 3,000 births. Sufferers are born with NF1, although symptoms often develop over a number of years. 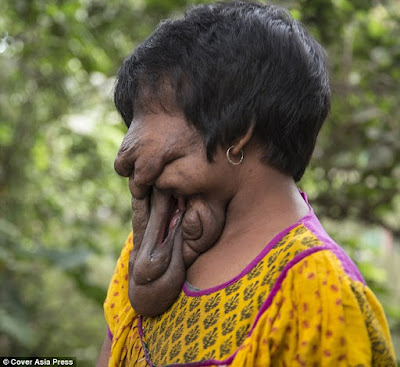 Khadija’s parents, Rashid Mulla, 60, and her mother Amina Bibi, 50, started to realize that something was wrong with their daughter when she hadn’t opened her eyes at two months old. “She was born at home but she didn’t open her eyes. She was born with thick heavy eyelids and she looked different to my other children at birth but we didn’t think anything of it until we realized she couldn’t open her eyes properly,” said Khadija’s mother Amina Bibi. “When we took her to the hospital she was admitted for six months and they did lots of tests but doctors eventually told us there was nothing they could do,” she added. Her condition worsened as she grow up and the extra skin forming on her face continue to grow out of control. The doctors told them that there was nothing they could do with Khadija’s condition. 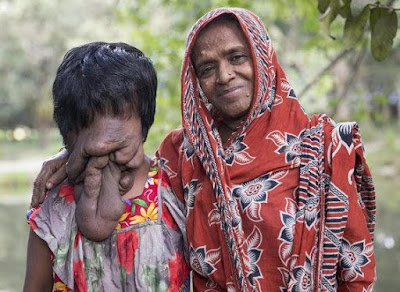 “I don’t have any real friends but I have my family. My family is my only friend and I love them dearly. My parents are my world. I don’t talk to strangers” Khadija said. “This is who I am and this is the life I live and I fill my days sitting and thinking, talking to my mother about life and going for walks near my home. I like drinking tea. I am happy in this life. If only the government would see my position and help me, I would like that,” Khadija added. According to Dr. Anirban Deep Banerjee, a neurosurgeon from Apollo Hospital, Kolkata, Khadija could have a ‘fatal tumor’ inside her face. Despite her devastating deformities, Khadija’s has still have a positive outlook in life. Even though she has never been able to see how beautiful the world is, she insists she lives a happy life. What a tough fight this girl had. What you feel upon reading her story? Share your thoughts with us now. And don’t forget to share this with your friends too. Source: http://www.trendspot.co/2015/11/she-has-no-face-but-shes-happy-this-womans-story-will-surely-bring-you-into-tears.html

Amazing: His heart was beating outside of his ribcage and a slight bump could kill him!

Amazing “Maybe This Time” Cover by Mikee Cate Will Surely Impress You
loading...