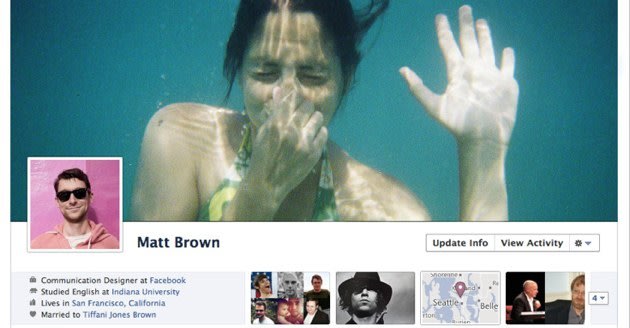 Has Facebook gone too far in reinventing the way we share?
Facebook users have noticed some changes rolling out to the social site in recent days, but odds are they aren’t prepared for today’s biggest social shakeup. At today’s F8 Developers Conference, Mark Zuckerberg took the stage (after look-alike Andy Samberg left it) to announce a wide swath of changes that will seek to keep the six year-old social network thriving — and growing. Foremost among the announcements is the news that the humble profile page is getting a much-needed makeover — one that could steamroll Google+ and Twitter alike: the Timeline. Mashable has called the new feature the “biggest risk since launching the social network in 2004.” The Next Webcalls the death of the profile page a “bit of a shock” and notes that the “massive makeover might just be a bit too much,” especially for less tech-savvy users. Sweeping changes Facebook’s new direction has a bit of a dual personality. At the dawning of the News Feed, Facebook loosed our status updates into the wild. While we once visited each other’s profile pages to trade messages and check in on friends (or acquaintances of interest, for better or worse), the News Feed has since eclipsed our personal pages when it comes to connecting on the world’s biggest social network. With today’s announcement of the Timeline and the Ticker, Facebook will seek to weave together these two modes into a richer, more immersive social experience than ever. 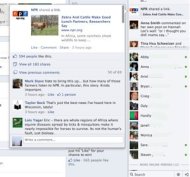 The new Ticker will keep you up to date
Two kinds of sharing The Ticker will handle the Twitter-like real-time updates, which Zuckerberg referred to as our “lightweight” social activity. Recognizing that these micro-updates (the contents of your sandwich or your Words With Friends score, for example) often clog up our profile pages, Facebook is opting to siphon them off into a kind of miniature Twitter which live in a righthand sidebar. The distinction may just seem like housecleaning, but putting these tweet-esque updates on the periphery could mean a return to Facebook’s roots — but a far more refined one.   Historically, Facebook has faced criticism for its opaque and often convoluted privacy policies. It may have taken the looming threat of Google+ on its turf to light a fire under the social giant, but Facebook is handing users the reins in a big way. In a series of updates that began popping up last month, the company is moving toward a model of selective sharing: rather than mass broadcasts, you can choose who you share with — because your great aunt doesn’t necessarily need to know what happened after the fifth drink at Happy Hour, does she? Choose the story you tell Now, not only can we share selectively with greater ease than ever, but we can choose what story we want to tell. Facebook’s new Timeline feature looks to invigorate the lackluster, cluttered profile pages we’ve been slogging through for the past few years, replacing them with a dynamic, customizable portrait of our living histories — as told through Facebook of course. While remembering just howmuch information Facebook has stored over the years will prove unsettling to some, by curating our own past experiences (or their digital footprints, at least), we can better represent ourselves on the social network. In the Timeline, you can choose to star an event, which will give it more real estate on your profile page — or you can hide it entirely with the click of a button. 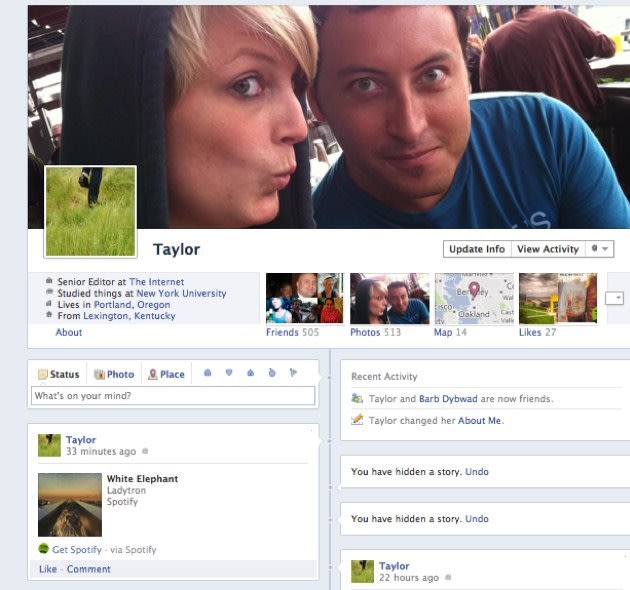 Facebook’s new Timeline feature will change the look of your social presence
At today’s event, Zuckerberg emphasized a return to the profile page: “We wanted to design a place that feels like your home. You invest a lot of time in it and you curate it.” In reinventing the timeline, Facebook will considerably cut down on the site’s signal-to-noise ratio, transforming each profile page into what is essentially a blog. In Zuckerberg’s words, the Timeline will give you “a nice visceral feel for who this person really is” rather than a messy read-out of their latest Facebook activity.

Apps will be more prominent than ever
Apps help tell the story The other side of the coin is that external apps will have more power than ever. To create a “frictionless experience,” Facebook apps will broadcast to Timelines and Tickers separately — and automatically. Like a new song you hear streaming on Spotify? That “Like” will be zapped directly to the Ticker, but in theory your Timeline wouldfeature a summary of your top artists that month. Once you authorize an app, it will fade into the background, collating your personal data like what films you watch on Netflix or Hulu and how many miles you just ran with the Nike+ app.   Of course, you could disallow these services entirely — but Facebook wants its 800 million users to hand over the keys to third-party apps more willingly than ever. (After all, who wants an empty Timeline?) From news to movies and music, more apps plugged into the social site means less need to venture elsewhere. You could conceivably keep your browser pointed at your Facebook homepage for an entire day, hopping off only to follow the trail of an interesting link — in fact, many of us already do. How to find the new features The Facebook community doesn’t take kindly to changes — even minor ones, and this isn’t minor by any means. Dedicated Facebookers are already in an uproar about the changes that heralded today’s news: annoyed status updates have readily denounced Smart Lists, the Subscribe button, the Ticker, and even the new privacy settings. All of these tweaks are available now to most users, and when they appear, you should notice a pop-up prompt that will walk you through the changes. Can’t find the Ticker? It should appear on the right side of any Facebook page, above the chat box. While many of the new features are now live, the biggest change — the Timeline— will roll out gradually. To be first in line, you can opt in now by clicking “Sign Me Up” at the bottom of Facebook’s official Timeline preview page. The first Timelines will be published on September 29, and we can expect to see them pop up for most users thereafter. This article originally appeared on Tecca