Inquirer.net has revealed the identity of President Noynoy Aquino’s mystery date at the Hotdog reunion concert on Monday. The “pretty woman” is Bunny Calica, a 27-year-old teacher who, according to the report, is “into early education” and works with Korean students. According to Inquirer.net, the pair met four years ago and saw each other again only recently. Supposedly the daughter of a former Boeing executive, she is said to have “a good head on her shoulders.” Inquirer.net reports that Calica and Aquino are “just friends who are seeing each other when time allows.” Last weekend, Calica had dinner with the President and his sister Kris Aquino’s sons, Joshua and Bimby, at the President’s private quarters in Bahay Pangarap, Inquirer.net reports and cites Kris herself. The TV host and actress added that Calica, said to dress simply, wore jeans and a long-sleeved shirt at the time. Kris Aquino’s youngest, Bimby, supposedly asked Calica if she was his uncle’s girlfriend. According to Inquirer.net, the President said, “No, but I hope so.”

Bunny Calica’s short profile: She was Bunny Calica a 27 y/o who is inclined to early childhood educationand is working with Korean students. She is said to be the daughter of a former Boeing Executive. 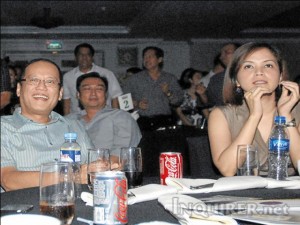 Bunny Calica and President Noynoy Aquino Pictures, photos during the reunion concert of Hotdog. The said photo was the one shown or aired in the news.